Resolutions to Results VI: Break it Down

The next step in this process is to take your fabulous, wonderful, thrilling goal, and break it down into tasks and actions. (For this post, "tasks" are bigger, more broad accomplishments, and "actions" are the smaller steps that add up to tasks. I've chosen the words arbitrarily, and the only thing that distinguishes a task from an action is how much effort you think it will take. More effort = task, less effort = action.)

Now that we know where we’re aiming, let’s map out how we’re going to get there. On a piece of paper, draw a box, and insert the Simple, Measurable, Active, Realistic, Timely, and Thrilling goal you generated in the last post. Underneath that box, write out a list of things that would be POSSIBLE to do to achieve that goal. As you write these things, remember that you're not creating a To Do list, you're simply generating a bunch of ideas.

As you brainstorm tasks on the path to your goal, keep the following questions in mind:
This is what your paper might look like, for example:

2. Set up a linear progression

With your list of possible tasks in front of you, go ahead and add numbers to them in the order that you would like to tackle them. (You'll notice this was already done in the example.) Be sure that they build on one another. For example, if one of your tasks is to run a mile, and another is to run in a 5k race, you’ll want to accomplish running a mile before running a 5k.

3. Break down tasks into actions

Then, once your list is in order, start by breaking down the first task into several actions. This process should repeat and repeat until you feel like you have a variety of actions that are of a manageable size.

To demonstrate this, the example (above) is continued below. This person's goal is to get a new job. The possible tasks are listed underneath the goal, and "Network" was designated task number 1, "Rework Resume" task number 2, and "Speak Publicly?" task number 3.

You'll notice that some of the tasks are broad, brush-stroke kind of tasks, like "LinkedIn" or "Alumni Network," and some of them are more specific, like "Networking Clubs – Ask Kirk, look online, ask John." If you trust yourself to follow through on a bigger, slightly vaguer action, then you can leave that action unexpanded. But if you have any doubt about your willingness or ability to get something like that done, expand it.

So what do you do if you have an action you want to perform but don’t know how to do it? Break that task down into “Ask for Help” and then expand that into a list of people you can contact for help! 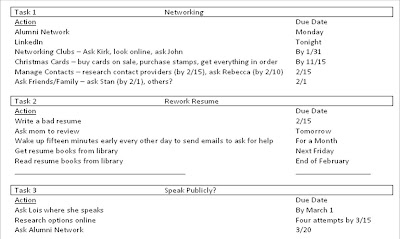 You'll notice on the example, too, that dates have been added. In adding these due dates, you'll want to keep Being Realistic in mind. Can you really write 500 pages by the end of the month? Can you commit to attending 5 networking events a week? Be gentle enough with yourself to avoid burnout, but challenging enough so that the effort of reaching your goal changes your day-to-day energy.

Each task and action should have a deadline for it. That said, the deadline can be “by next Friday,” “by March 1st,” or “by the end of the year.” As those deadlines approach, you’ll revisit the list of tasks and subtasks and update the deadlines.

You may notice that as you’re adding tasks and due dates that lots of emotions come up for you. Resistance, anger, fear, frustration, or just general discomfort. That’s because you’re making change. Achieving this goal is something you’ve wanted for some time, or you wouldn’t be going after it now. Just know that your challenge to the status quo is going to bring up some of these feelings.

And that’s totally ok! In fact, it’s good! A friend of mine used to say “if it’s uncomfortable, that’s good, it’s growth.”

These feelings are part of what we’ll be working on in the next post, so be sure to come back!