Just last week I was certified in Ken Blanchard's Situational Leadership Model (II), which basically helps leaders determine where their direct reports fall on an intersecting continuum of commitment and competence.  Then, depending on where those followers fall, the leader flexes his or her style to meet the followers where they are.

The picture below helps describe this.  The D1-D4 section at the bottom relates to the follower's commitment ("will do") and competence ("can do") and the four-box at the top relates to how the leader should interact with the follower based on his or her "D" status.  You can see that if the person is a D1, the leader should use Style S1, which involves a lot of telling, directing, and "high-directive, low-supportive behavior."

It's a great model, and what I've given you is a two paragraph overview of something much more complex (and if you'd like to know more about it, email me, I'm happy to discuss) but it got me thinking:  isn't every successful interaction situational?  Aren't we always flexing ourselves to try and meet someone else where he or she is in the moment, or at least where we think he or she is at the moment?  (And if not, should we be?)

For an easy example, think about trying to figure out the best way to convince someone to see things your way.  You know you're short on time and you want to be most effective, so your two axes this time become "interaction preference" and "time": 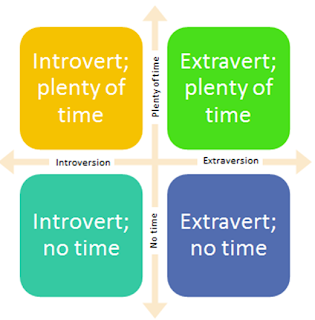 If you're trying to convince an introvert with no time, you'd probably be more successful writing bullet points for him/her to read over than if you try to sit down and talk things through.  Similarly, if you've got an extravert with plenty of time, do it over lunch and chit chat about all the reasons it's a good idea.  An introvert with plenty of time could be given something to read or have a one-on-one discussion with time to process.  An extravert with no time might need a quick conversation outlining the major benefits.

I'm not saying this model (which I just invented) is backed with the kind of research Blanchard's is.  It's not.  And, hell, I'm willing to be wrong about what I've suggested would be successful.  But you can see my point:  how taking someone else's preferences into account can help you be more successful in whatever it is you're trying to accomplish.  However, it's making a pretty big assumption you know what the other person's preferences are.

Another example could be trying to teach adults -- do they want to absorb or do?  Do they have great knowledge or little? 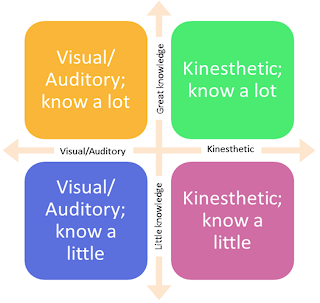 Again, if I've got visual/auditory learners who know a lot, I can show them pictures and have a dialogue with them, whereas if I've got kinesthetic learners who don't know much, I need to give them an experience with whatever it is I want them to learn.

But again, I'm assuming I know what the other person's preferences are.  Where this starts to get a little wonky -- and yet, it still holds true that we flex ourselves in these situations -- is in dating.  The four-box in dating would be on the continuum of how much "he likes me" and "I like him." 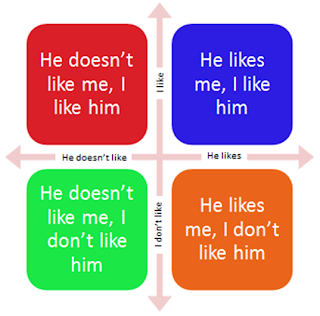 The question here, though, is which box yields the most authentic behavior, and which one is the most "successful"?  Sadly, I have no suggestions for how to behave in each box of this "date-uational model."  I'm simply pointing out the fact that when there is something we want from another person, we're well-served to look for signs of where that person might be and try to meet him or her there.

So what can you do to try to meet someone where he or she is?  First observe their behavior and try to meet them where they are.  And, if you need to, ask questions.  (Though you may get mixed results with this one if you ask your date "where on the continuum from 'he doesn't like me' to 'he likes me' do you think you fall right now?")  Pay attention to the other person.  And be willing to admit that your approach is not the only one that works.
No comments:

Many of my clients tell me they want to own their lives.  The focus of this work varies -- some clients are trying to get clear on what they want, some are trying to identify and end bad patterns, and still others are trying to create new patterns that serve them better.  But the crux of it is the same: my clients are all taking greater personal responsibility for the way their lives are going.  (And I applaud them for that.)

The tricky thing about personal responsibility is that it's so easy to shirk.  What's your internal monologue when you misplace your keys?  When I do, the first thing I think is, "this can't be happening."  The second thing is, "did someone move my keys?"  Then I slide into "I can't believe I lost my keys -- what an idiot!" and then, "I'm going to be late if I don't find my keys.  I HAVE TO FIND MY KEYS!"  I never approach lost keys with the mindset of "yes, of course, I've misplaced my keys somewhere and will be able to find them in no time."

An interesting article by Christopher Avery uncovers a very typical thinking pattern when it comes to personal responsibility.  In his model, Avery points out that when we first face a problem, the brain's immediate reaction is to deny that the problem is even happening.  (My old roommate and I had a running quote board and the one that lasted the longest up there was "It's Ok, It's Not Happening.")

The next step in the process is to lay blame.  I think tons of people in the world just get stuck here and never move past it.

After blame comes justification.  If nobody else moved my keys, I must have put them in a safe place (and not their normal place).

After justification comes shame.  So many people get stuck feeling bad about the decisions they've made that they don't own up to having made them.  Shame gets its own cycle for many people, spinning them off into other, more distracting kinds of despair.

After shame, there are two choices -- you can either accept that the situation is what it is and that you are somehow obligated to move forward with it (gritting your teeth, of course), or you can run away and quit, dropping whatever it was you were doing in the first place.  (In the keys example, this might look like feeling like you have to leave the door unlocked because you couldn't find your keys, or deciding not to leave the house at all, thereby removing the need to find your keys.)

It is only by realizing that you have choice at every stage that you can move through the stages of the model into owning your responsibility.

There are three things that will help you live in a place of greater personal responsibility and move through all the phases between denial and responsibility more quickly -- having the intention of owning your shit, being aware of where you are and how you might be getting stuck in one of the stages in the model, and confronting yourself with reality by questioning the assumptions you are making.

Here's an example of how I put this into work.

I was in a training class at a hotel recently and over the break I needed to check out of my room.  I went to the room to pick up my suitcase, and the key didn't work.  My first thought was, "well, that's not right, the key's supposed to work," (denial) so I tried again.  Didn't work again.  Then I thought, "Oh, the front desk must have cancelled my key!" (blame) so I called them to get it fixed and I had to make the round trip to the front desk, adding to the time I was away from class.

On the way back to class, I really wanted a cup of coffee, but I knew I was going to be late.  I ran through all the reasons I could use to apologize for my delay -- the key, the front desk, how bad I felt about being late -- and I ran through what it would feel like to sit in the class without my coffee (obligation) and I decided that I would "own my shit."  I chose to have the coffee, even though it would make me late, and I wasn't going to blame anyone, justify my lateness, or even feel bad about it.  I was at choice, I was aware, and I was willing to take ownership if need be.

In this world it's easy to be hard on ourselves for the mistakes we make.  Especially when we feel we should know better.  But to truly own your personal responsibility for your life, you have to see that mistakes aren't inherently bad.  That the world is not black and white.  And that there are going to be times you do things that would be easier to blame or justify away.  The benefit to personal ownership, in my opinion, is the feeling of freedom and choice that comes along with it.  Saying, "I did this.  I chose to do it.  And maybe it's not perfect, but it's what I did."
1 comment: