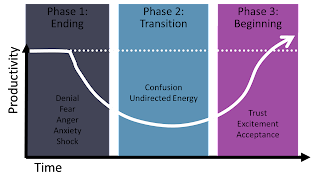 I bring this up because it's easy to get frustrated during a change -- especially if you're changing with other people.  You may go through each phase fairly quickly, while a loved one or coworker doesn't.  The important thing to remember is that a) if you're in the middle of a change, it does get better, and b) just because you're on board doesn't mean others will meet you there on your schedule.
No comments:

I recently attended a Learning Video Boot Camp and made this video -- luckily, it's another one of those times where my training and coaching (and former-acting) worlds overlap.